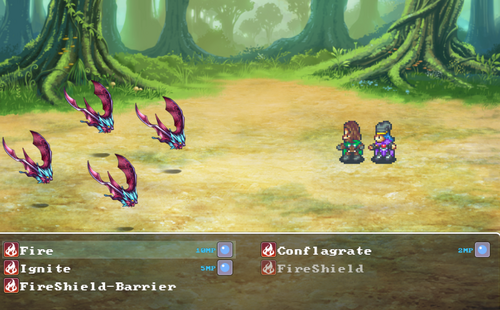 Well.  I only have a few minutes to type this, but there's really quite a bit to post mortem on this project, so please forgive that this may be a bit of a stream of consciousness piece.

This game was a very different project to me from the last three.  Salamander was entirely learning, Aging was a game jam, and Pi was, in my mind, an expansion of the things I learned from Salamander.  Well, I guess that's really how it goes.   Lucius -- whose title I came up with in the last few minutes of development -- was a pretty tough project.  A few challenges faced:

I cover this idea a lot better in my "pre post mortem".  I wrote a note towards the end of the project on some things I had learned that I didn't want to forget.  Mostly that I need to learn how to budget time/production.  My hypothesis is that most indie/hobbyists are used to creating without limits on their time/money.  That can lead you to become very "precious" with the work and not see it through to completion.  There were many things that did not get accomplished in this project namely:  Polish, Character Animations, Custom Music, Custom Status Windows, proper Parallax Imaging -- just to name a few things.  When you put yourself on a budget, even if it's say for an alpha -- you really start to hone in on what the game really is.  I started prioritizing certain narrative bits and combat mechanics, or even world building, in lieu of technology additions, etc.

One thing especially is that when working on a project, overestimate the time it takes to learn a new thing.  So in my case, towards the end I budgeted two hours towards parallax image learning.  That two hours FLEW.  You have to find the youtube videos, you have to watch the youtube videos, you have to scan forums, you WILL inevitably have something go just a little differently.  And if not, great you're ahead of schedule.  In my case, who knew that the parallax image would be weird and multiply and have to be adjusted to a larger canvas.  It looks so easy on the youtube video.  Which also means...

Right now, I'm trying to take a week off between projects.  I need some downtime to catch up, refuel.  I'm planning on playing some games this week and just get re-inspired and really REST.  I also want to experiment with things though -- if not this week, then next.  The time to learn is in between if possible.  Learning during a project takes a lot of extra time on the part of the budget.

So many decisions were made far too slowly.  From the name of the project to the names of characters to the way that mechanics work to the overall scope or idea behind the design!  It was pretty ridiculous this go.  Indecision is costly and I need to learn how to make a decision and stick with it sooner.  It's costly to go back and try to change names and design elements.   Which also leads to my final conclusion for now.

(Aside:  It may actually be of value to produce an alpha to my alphas.  All of these games I'm producing now are meant to be largely trials and experiments in order to become faster and to become prolific.  It may be wise at this point to begin testing elements such as combat design, and send to folks to try just a battle etc to get faster feedback before building the game around that mechanic.  That may help in decision making as well as with the next point)

As fun as it is to name something "MONKEY PUNCHFACE" because I can't think of what to name it or to have 5 test maps or to have a bunch of sprites that don't have real names -- this is waste.  Eventually I'll export and out of fear, I won't touch those things because something might very well break.  Cleaning as I go may be optimal because at least I won't run into the problem of either breaking things later or poor naming conventions.

Something highly worth repeating

Focus Timers. This was one of the best things I learned from this project.  Focus timers are where I set 5 - 10 minute timers that require I only focus on the task at hand.  Not only does this help me get started, it also helps me keep going when things get difficult.

Areas Where This Project Succeeded (May add more later, lacking in time but this one was important)

Narrative.  Although this doesn't have the vast world that Pi creates and some narrative feels a bit lacking, I like that there is actually a "story" and a "point" to this game.  I actually feel like some very real pieces of me are in here, and that makes me feel really good to know that I'm saying something.

Overall, this was a tough project to get through.  I learned a TON through it though and I'm glad I saw it through to completion.  I have a lot of unfinished business in the form of things I wanted to learn this project that I didn't have the opportunity to do given time restraints.  I did not want to complete this project and frequently, halfway through thought, "this is gonna be a pretty bad, ugly project."  But really, now that it's complete, I'm very pleased with it and think it has qualities that exceed the previous games.